Sea-Intelligence reports 50% of congestion has been resolved

With the continued gradual improvement in schedule reliability in August 2022 and the resultant improvement in vessel delays, the global fleet that was unavailable due to these delays dropped to 7.9%, according to the latest report by Danish shipping data analysis company, Sea-Intelligence, while the peak of 13.8% was in January 2022.

"Keeping in mind the baseline unavailable capacity of 2% (as there are always some delays), at the height of delays in January 2022, an additional 11.8% of capacity was being absorbed," said Sea-Intelligence's analysts.

Since that level is down to 5.9% additional capacity in August 2022, this essentially means that the congestion issues have been cut in half, compared to the situation in January 2022.

Danish firm notes the significant injection of released capacity has led to a situation, where the physical shortage of capacity, which drove the freight rates up, is no longer an issue in most trades. 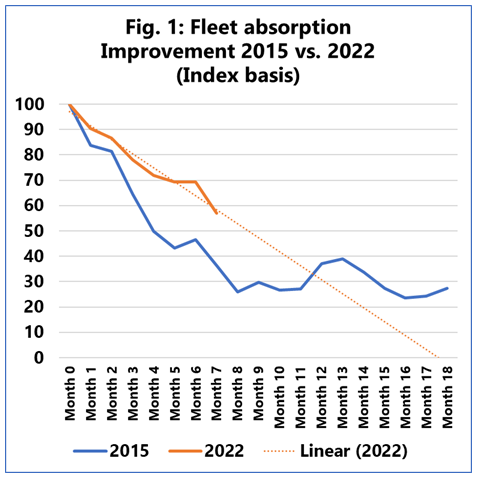 "The question is then, how long will it take for this gradual improvement to get to a point, where the market is fully back to normal?" asks Alan Murphy, CEO of Sea-Intelligence, only for him to answer that there are multiple different ways to look at this.